At Synergy Staffing, we understand what it means to love what you do. Each member of our team is genuinely passionate about connecting individuals with incredible opportunities. With Synergy, you’ll gain a partner to help you on your career path. Your recruiter will help you find the right career opportunity and get the most out of your employment search. When you’re happy and your new employer is happy, your recruiter will be happy. We invite you to get to know a little bit about them.

Frank has over 25 years of recruiting and placement experience. He has worked in many capacities throughout the staffing industry, including Recruiter, Recruiting Manager, Account Manager, Sales Team Manager, Branch/Division Manager and now Founder/President.

In 2006, Frank decided to pursue his dream of becoming a business owner. He has never had a more enjoyable and challenging experience.  The success of Synergy can be directly attributed to a number of factors, including Frank’s work ethic, honesty, passion, and desire to help both the customer and the candidate.  He realized from the very beginning that those relationships would be the most important and rewarding aspects of his career.

Frank holds a Bachelor’s Degree in Business Administration.  When he’s away from work, he enjoys spending time with his wife and three children, exercising, and being his kids’ biggest fan when they’re participating in sports. His continued goals are not only to be a great person to work with and for, but to be a great husband, father, and friend. 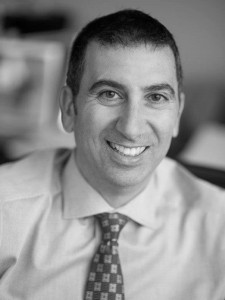 Ed has more than 22 years of experience in financial planning and tax preparation, where he helped individuals and businesses to achieve their goals through expert advice. His experience includes owning several small businesses, working for the IRS, and working in the insurance sector.  Ed helped to finance the beginning stages of Synergy Staffing Inc. and is a member of the ownership team. He holds a BS in Business Administration with an Accounting major from Duquesne University.  Beyond work, Ed enjoys spending time with his wife and two children.  He enjoys working out, skiing, and being part of his kids’ outside activities.

Eric has over 20 years of professional staffing experience.  He has worked with key decision makers, such as CIO’s, Presidents, HR Managers, and CFO’s, to name a few.  He excels at developing new accounts in a competitive sales market by cold calling and establishing relationships with upper-level management and key decision-makers. Eric is responsible for presenting Synergy as the go-to solution for Pittsburgh companies that need to fill contract, contract-to-hire, and direct positions. He also keeps the stream of qualified positions fresh and helps the recruiting team to prioritize each day.

Eric is a 1996 graduate of Bethany College who holds a Bachelor’s degree in Communications. He enjoys spending time with his wife and three boys. He also enjoys being involved in his kids’ sporting activities.

Chris excels in the role of Sr. Account Manager with Synergy Staffing.  He joined the Synergy team in January 2009.

Prior to his tenure with Synergy, Chris was employed as a Client/Account Manager by two recruiting firms in the Pittsburgh area, where he was responsible for executive recruitment and client development across a similar industry spectrum.  His background prior to IT recruiting was concentrated in Sales.

A Pittsburgh native, Chris earned his B.A. in Communications and Rhetoric from the University of Pittsburgh. He also attended West Virginia University and the Columbia School of Broadcasting.  Outside of work, Chris can be found with his wife and family in the southwest Pittsburgh suburbs, where he enjoys making wine, discovering new restaurants, swimming laps, playing chauffer for his kids, and coaching youth hockey and recreational baseball teams.

Bobby joined Synergy Staffing in the spring of 2006.  He lead the IT recruiting efforts at Synergy Staffing for the last eight years and was instrumental in the growth and the positive brand awareness the company has experienced. In April 2014, he transitioned full time into Account Management to continue to develop new client relationships. Bobby’s success was rewarded when he was offered minority ownership, solidifying his future with the company.

Bobby has earned a Bachelor’s Degree in Education from Duquesne University and maintains a steady presence at many Pittsburgh Technology Council events. Outside of work, Bobby enjoys being an uncle, skiing, fitness, ATV riding, and working on home projects. In the fall, you will most likely find Bobby with his bow chasing trophy whitetails and other big game species in various parts of the country. 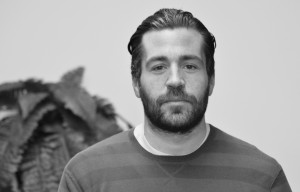 With 10+ years recruiting experience ranging from Information Technology to light industrial, Ryan brings a diverse recruiting background to Synergy Staffing.  Ryan tries to separate himself from the competition with a very personal approach to the employment-seeking process. His approach allows him to have a long-standing relationship with anyone he works with.

Ryan loves his job and enjoys working at Synergy.  When he’s not working, Ryan enjoys working out, playing tennis and basketball, shopping, and volunteering for local Humane Societies.

Justin was a four-year starter for the Washington & Jefferson Baseball team and served as team captain during his senior season.  His passion for sports has provided him the opportunity to coach both high-school and summer collegiate baseball programs. Justin is also a member of the Phi Delta Theta Fraternity.  His interests continue to be athletics, information technology, meeting new people, and continuing to grow as a professional in the Pittsburgh community.

Mike Kozikoski brings 5+ years experience and passion working in the recruiting field to Synergy Staffing. Mike graduated from Waynesburg University in 2005 with a Bachelor of Business Administration degree.

After growing up in Peters Township, Mike made a change and accepted a position in Michigan.  Two years later, he would accept a position back home and continue his successful career in the recruiting field.

Mike is a huge Steelers fan and an athlete. He played collegiate football and golf at Waynesburg. You can see him on the links around Pittsburgh on weekends, continuing his golf career. With his booming voice and exciting personality, he fits in perfectly at Synergy Staffing. 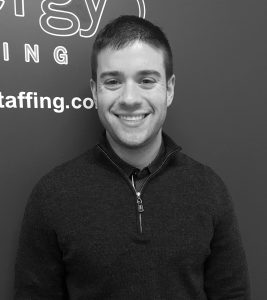 Michael Feinberg joined Synergy Staffing in January 2018 as an Information Technology Recruiter. He is a true professional with his ability to source and screen top talent while building long lasting relationships with his candidates.

Outside of the office, Michael enjoys spending time with his wife, cooking delicious meals, running a Spartan Race, or at the gym. 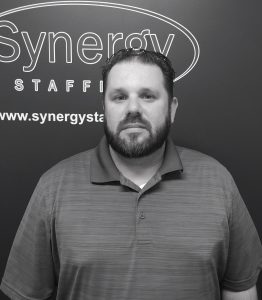 Jack joined Synergy Staffing as an IT Recruiter in 2018 with over 8 years of recruiting experience. He has recruited in IT, Engineering and Manufacturing. Jack graduated from Edinboro University in 1999 with a BA in Communication. He’s held various roles throughout his career, in sales and management but found his passion and success in recruiting.

A Pittsburgh native, Jack lived in South Florida for 5 years before returning to his hometown where he lives with his wife and two children. He enjoys all Pittsburgh sports teams, but his favorite athletes are his son Jack and daughter Abigail. Jack spends his free time at his children’s activities, especially as his role as a soccer coach. 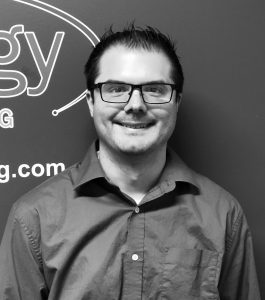 Branden comes from a long background in Customer Service. He uses his Customer Service background to form lasting bonds with his clients. Branden graduated from South University with a BS in Business Management. He moved to Pittsburgh from the Buffalo, NY area and enjoys spending time with family and friends. In his free time Branden likes to attend concerts, visit the casino, watch sporting events, and volunteer at the local schools. 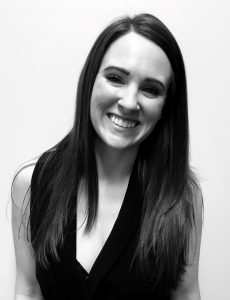 Bethany Black joined Synergy Staffing in June of 2019 as an Information Technology Recruiter. Prior to joining Synergy Staffing, she had worked in inside sales for three years.

Bethany graduated from La Roche University with a Bachelor’s Degree in Sociology and Psychology. She also has her Master’s Degree in Marriage and Family therapy from Liberty University.

Outside of work, Bethany is heavily involved in animal rescue. She has five pets who she often refers to as her kids, which consist of four cats and a tarantula. All of her pets, including the tarantula, were rescued from very bad situations and she nursed them back to health. She volunteers for Pittsburgh C.A.T as an adoption screener, and also volunteers her time in their clinic helping care for sick cats and assisting with spay and neuter clinics. In addition to animals, she enjoys shopping and fashion.

Dan joined Synergy Staffing as an IT Recruiter in September of 2019. Before coming to Synergy, Dan worked in sales as a Commercial Insurance Broker for 6 years. He uses his sales and customer service background to source top candidates, build relationships and match each person with their ideal position.

Dan graduated from Penn State with a Bachelor’s Degree in Kinesiology in 2012.

Outside of the office Dan likes to play softball, tennis and golf. He has served on the coaching staff for the Upper St Clair High School Baseball Team for the past 4 years and volunteers as a buddy for the Miracle League of the South Hills. 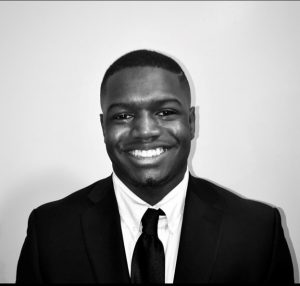 Josh joined Synergy Staffing as an IT Recruiter in 2020.  He really enjoys building meaningful relationships and helping people in any way possible.  Throughout college, Josh was very involved in mentoring programs along with performing community service.  Josh realized working as a professional Recruiter, could turn his passion of helping people, into a career.  He is committed in getting to know each person he represents – so, he can place them in a position that matches their career goals.  He is excited by the challenge of continuing to grow professionally, and the chance to meet some wonderful people along the way!  His experience also includes working as a Property Preservation Associate where he would regularly communicate with contractors.

Josh graduated from Washington and Jefferson College in 2019 with a degree in Business Administration.  In his free time, Josh enjoys working out, watching sports, cooking, and spending time with his loved ones.